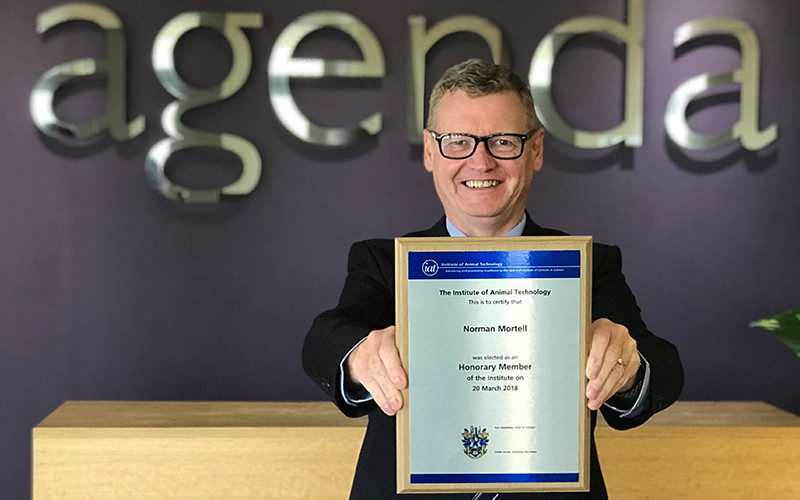 Agenda Life Sciences are proud to announce that in March our Managing Director, Norman Mortell was awarded ‘Honorary Member’ status by the Institute of Animal Technology (IAT).

Each year the IAT Council may nominate Honorary Members, this is seen as any person who has substantially furthered the interests of the Institute. This person is then invited to Congress to receive their reward.

At this year’s 2018 Congress, Norman was given Honorary Member status in recognition of his commitment to the animal research community over more than 20 years. of volunteer contributions.

Throughout Norman’s career he has been closely involved with the IAT on a volunteer basis and often in his own time, he founded and was the chair of his local branch for many years and latterly was the Chair of the Communications Group on the main IAT Council in London. Norman is passionate about providing Animal Technologists with career development opportunities, almost as passionate as he is about animal care and welfare. Norman is a staunch advocate of the IAT and encourages youngsters to get involved and shape the future of the IAT.

On hearing of his award, Norman said “I have always been an advocate of looking after the people who look after the animals, the IAT supports the development of professional animal care and welfare qualifications to support ethical research that has animal welfare at the centre of its principle.  I have been proud to be a part of the IAT and receiving this award is a real honour.”